The wind was right for a very quick return to St Lucia. We lifted the anchor at 06:00 and motor sailed for the first hour until the breeze filled in. The wind angle was perfect for us to be on a broad reach all the way. Iain was having fun helming. He maintained a steady 11 knots for most of the journey arriving in our very familiar anchorage, Rodney Bay at 16:30.

We had an easy evening on board.

The next morning we made a quick dinghy trip ashore (it had to be quick as we were illegal immigrants - we hadn't checked into customs!) But it's a small world and we were spotted by a very familiar face from Norfolk! Ollie, a friend of Sophia’s who works as crew on a large Super Yacht. We had a quick chat before heading off.

As soon as we were back onboard we set off for Fort-de-France, Martinique - Just a short four hour hop.

We were pleased to arrive in Martinique. We were beginning our journey north with the anticipation of lots more exciting islands to visit. We made a schedule including timescale of islands to visit ensuring we had sufficient time before the hurricane season begins and we have to leave the Caribbean.

We planned to stay a week in Martinique. Plenty of time to tick a job from The List, a trek and some sight seeing. The week turned into ten days. We did not anticipate the Carnival or meeting Jan and Greg Paine! We had a truly wonderful time and so glad Greg came over to invite us for Sundowners on his boat which turned into supper and a very boozy evening. This set the tone for the next week! The four of us had a common bond. Greg and Iain both belong to RORC. We hoist the same Ensign. The evening was full of stories of our journey from Europe, culminating in our experiences crossing the Atlantic. Greg kept our glasses full and Jan produced a wonderful curry. We knew we were going to have fun together.

The carnival was spread over four days. At the celebration's end, Lent begins which leads to Easter. Tradition requires that during Lent there is no dancing, listening to music, no weddings or other celebrations.

All are postponed until after Lent. This means there were big

celebrations every night for four nights. When the dancing stops around midnight, the custom cars take over the roads and parade back and forth making a remarkable noise.

Each day has a theme. Sunday was multi coloured and primarily

On Monday, Carnival transforms into a burlesque day full of weddings that have to be seen to be appreciated. Men and women challenge gender roles for weddings, with men dressing in drag and women dressing as bridegrooms. 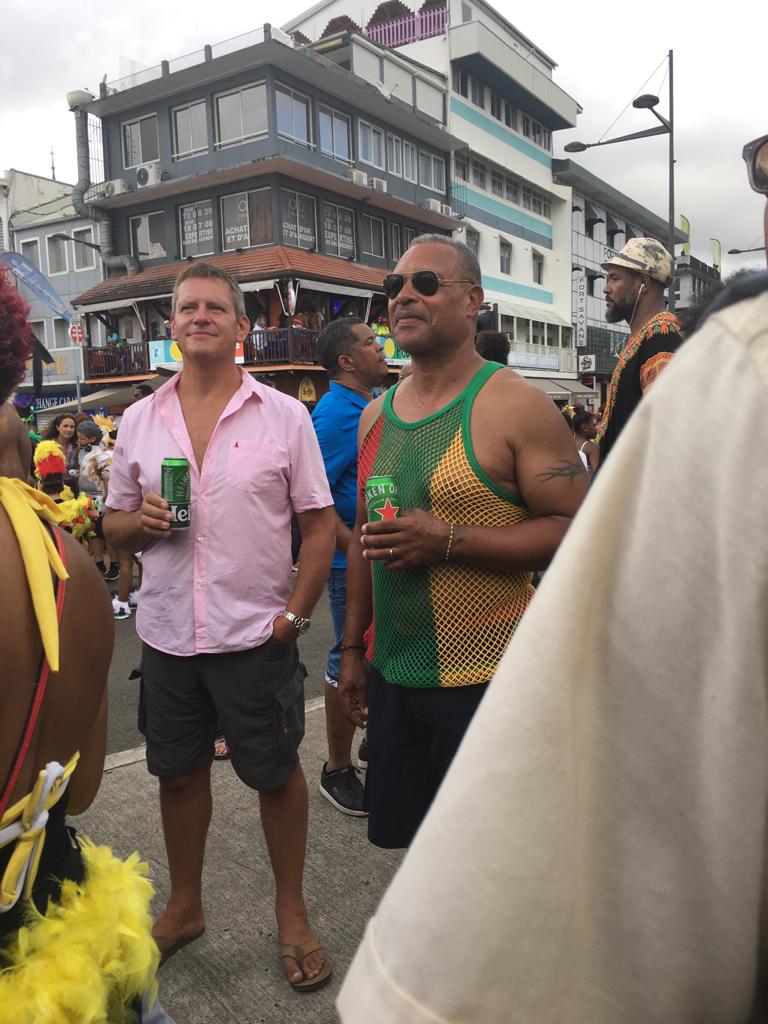 Tuesday is the day of the devil. Everyone celebrate by dressing in red with devil masks to parade across the city.

The theme on Ash Wednesday, day of grief, is death, the King Vaval is destined to be burned at the end of the night. A big funeral parade takes place to pay him tribute and everybody wears black and red. 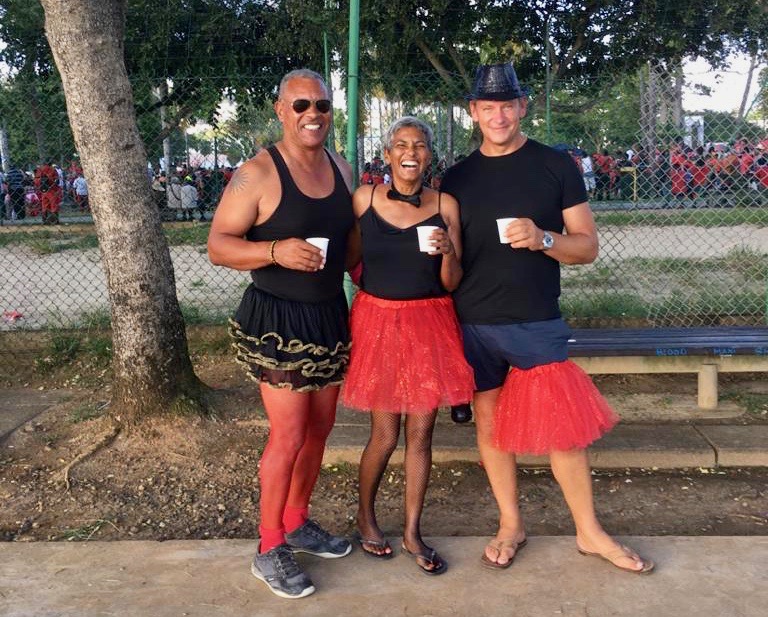 Needless to say, the four of us joined in everyday. We even joined the dancing processions around the town following the bands and learning to chant in French, not really sure what we were chanting but happy to be included in such local celebrations. The atmosphere was very convivial, young and old joining together.

Carnival was in the afternoon. One morning I went for a little sight seeing trip around the streets we had been dancing in. I discovered a quant old building which was dedicated to telling the story and traditions of the island. Also a very impressive library designed by the architect, Gustave Eiffel and the Cathedral who’s architecture resembled the library.

We needed a day or so to recover. What better way than a trip to a famous garden, art exhibition and rum outlet? We were going to Habitation Clement.

On our first night in Martinique, Iain found a very interesting bar tucked in a side street full of local colour. The bar was tiny, but full of life and colour. I got talking to a regular to the bar, Christian Dupoux. We soon discovered we had similar interests. Art and Trees. I was in heaven. I was not trying to join in a conversation about boats and oceans. I could actually contribute to this discussion. Half an hour later we were the best of friends and I was armed with all the information we need for a spectacular day. What could go wrong?

We got the bus to the airport, then found a rental company and hired a car for the day. The car was not the finest specimen on the road, very small and very slow. Iain was struggling to get it up the hills. Eventually, we arrived, to find the car was leaking oil.

I went to the ticket office, collected the map for the gardens, showcasing large sculptures by local artists, and some majestic specimen trees. There was also an indoor art exhibition and the old rum distillery to explore.

I was very excited. I even had the head set which explained the artists and their works. Iain was in for a long day. Iain left me to it while he went to phone the car hire company who were not concerned as long as the car still had oil in it, we should continue using it!

I started the trail. The head sets were not working. I returned to the office where the very kind young lady checked and replaced the original set with a working pair. I started again, hearing all about the old house and the large trees which were planted as saplings when the house was commissioned.

At this point the heavens opened cascading warm rain all over the gardens and its visitors. I was too excited to worry about a little warm water. Dismissing the rain, I approached the sculpture trail, but could not get my headset to work again. I tried several different installations venturing further from the ticket office. Eventually, I stopped a French family who could clearing hear the commentary and asked for assistance. We ascertained my headset was not working. I returned to the young lady in the ticket office. She exchanged the headset, again I tried and failed.

On my third attempt, having lost my sense of humour and extremely wet, the ticket office discovered only the initial section about the trees had been translated into English. I was upset, however relieved it was not my inability to operate yet another piece technology. I continued, Iain eventually joined me, the rain stopped and we explored the art gallery and rum distillery together.

On the way back to the airport, we decided to stop for something to eat. We saw a road side sign directing us to a restaurant. We followed the signs up a very steep incline praying the car was going to make it. When we eventually arrived, we should have gone with our first instincts and left. But ever hopeful, ever in my Disney bubble, we entered what appeared to be a closed, very large empty establishment. There was a table of 10 other guests who encouraged us to stay. We were told they came often and the food was very good. It was a set menu with three options. We thought it had potential. We stayed. Another family of four also joined the wait.

in any country! Not only was it badly cooked, poorly presented but the wait was so long the waiter/proprietor actually got a clap from everyone in the restaurant when our starter arrived an hour after taking the order. When the main course was presented things went from bad to worse, by this stage it was so awful, everyone in the restaurant were laughing. We could not eat it. We decided to leave, but Iain paid the bill as it was clear this was not a wealthy establishment. The proprietor was embarrassed we were not staying for the third course. He thrust two creme caramels and two spoons in my hand as we were leaving. Perhaps all was not lost, my most favourite pudding in the entire world. When we were safely on the main road, still leaking oil and engine straining, I opened the pudding, it was rancid.

We had a wonderful ten days. We met some genuinely good people, with whom we had lots of fun and experienced the true culture and warmth of the island’s people living life to the full. What more is there?